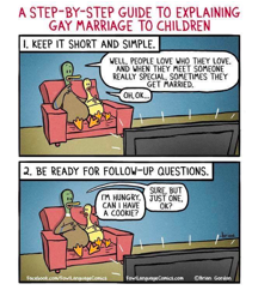 The new relationship and sex education guidance proposed by the DfE was passed last Wednesday 27th March by parliament, with a huge majority of 538 to 21 votes.

However, getting the new guidance passed through the house has been  not been a simple task despite the evidence base and almost unanimous support from both sides…

Instead of celebrating a huge step forward for young people’s rights and safety, much of the headlines have instead been distracted by the protests outside schools in Birmingham and Manchester. Some people are concerned whether children in primary school need to know about LGBTQ+ issues or will be able to cope with the information.

So let’s move past the headlines and clear things up.

In 2010 the Equality Act enshrined in law particular protected characteristics to ensure that all people, regardless of their religion, ethnicity, gender, age or ability would be treated fairly and without discrimination. This means all public bodies, and that includes nurseries and schools, have a legal responsibility to considering the needs of all individuals when carrying out their day to day work, but must also work to protect people and eliminate discrimination.

This means that schools should have a curriculum, which celebrates differences and fostering good relations between people regardless of their background or identity.

There is no correct order – they are all equal – hence the name.

This is an essential point to make – as just because a person has  a particular religious belief – that being gay is wrong, for example, this does not have any more value than a persons right to marry, fall in love or have a relationships with someone of the same sex.

All schools have a responsibility to teach children about the world they live in and to remove any form of prejudice or discrimination. There are no outsiders in our schools – everyone is welcome.

This means that in the UK it is a legal requirement to ensure all schools are LGBTQ+ friendly and this something that all Ofsted inspections are required to uphold. This is not new it has been the case for 9 years.

This legislation made it illegal for nurseries and schools to fail to protect LGBT people and their families. Not only this but all schools should deliver lessons that include stories and examples of diverse family structures and this includes same sex families.

Two men can fall in love and get married, just like two women or a man and a woman.

People have children in different ways. Some children have foster carers or are adopted to their forever families. 1-in-8 adoptions in the UK are to same sex couples. Two men, or two women can get married and adopt a child and give them a safe home. Families come in lots of shapes and sizes, but one thing they should have in common is they care and support each other and everyone feels safe.

Some children will grow up gay or bi-sexual and they need to know that it is ok. We don’t want any child regardless of their sexuality to grow-up thinking there is something wrong with them or with their family.

The new guidance for RSE merely continues these messages we have been legally obliged to respect for nearly 10 years. None of this is new. The only difference is now we have an official place to house these lessons – and an opportunity for every child, no matter what shape their family comes in to see them represented and respected in school.

There is absolutely no evidence that talking to children about the realities of the world they live in will make them gay. We are teaching children to not be afraid of difference and to be respectful of everyone, regardless…

For more information about our primary programme click here:

To find out more about how to talk to children about sexuality & gender click here:

You cannot copy content of this page: ©2019 GOTR SRE Consultancy Limited. All Rights Reserved (all wrongs learned from).