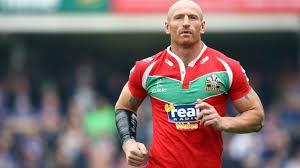 You have most likely come across news about ex-rugby star Gareth Thomas this week. He has been across the papers, social media, has appeared on breakfast TV and even had his own documentary that aired last Wednesday on BBC Wales.

For those of you that aren’t big rugby fans – you may not be aware that Gareth Thomas was considered a warrior of the game. He achieved everything there was to achieve, in both codes, including captaining his country and even the British and Irish Lions.

Gareth Thomas then went on to show his bravery again when he came out as gay in 2009. The first professional rugby to do so – in fact he was one of the first professional sports men in any sport, still playing to come out. He showed great courage and paved the way for future sports men and women helping them to openly be themselves.

With the Rugby World cup kicking off – it makes sense that former rugby names would be in the press…. However, if you have seen any of the clips online, you will know that Gareth has revealed he is HIV+.

Again, Gareth Thomas – has shown great courage and vulnerability – proving that a guy can do both… He is using his own story to break the stigma and misinformation that still surrounds the virus.

Indeed, leading HIV charity the Terrence Higgins Trust has seen a surge in calls and web traffic since Gareth spoke out and went public – as people want more information about the virus. THT have also experienced their busiest day of orders for HIV self tests.

Unfortunately, there is still a lot of fear and misinformation that exists around HIV. You would think that with the illness being on the national curriculum for science for years – that people would be better informed. However, most of my generation’s knowledge around HIV comes from the public health campaigns in the 80 and 90s of the AIDS crisis showing tomb stones crashing to the ground.

There have been no new HIV publicity campaigns since – despite the fact that the reality of living with HIV these days is very different. What people need to understand is that if you – like Gareth Thomas are on treatment – you can lead a full and healthy life. Gareth, takes one tablet a day to keep his condition under control to the point that it is considered undetectable.

This means that if you have an undetectable viral load you can not pass the virus on – even through unprotected sex. Did you know people on treatment living with HIV in the UK today are considered to be healthier than the general population?

Gareth highlighted this fact, as hours after choosing to reveal his HIV status – he completed the Ironman Triathlon in Tenby.

Actually this isn’t quite accurate – Gareth didn’t actually choose to disclose his status. Certain journalists after finding out of his status turned up at his parents house and broke the news to his unknowing parents – they then threatened to break the story…

Gareth Thomas again showing the warrior spirit that characterised his rugby playing days chose to take matters into his own hands and not only reveal his status publicly, but with support from THT has taken the opportunity to support and educate others.

Gareth has shown he is not just living with HIV he is thriving.

How can you use this story in school?

This is an ideal story to raise the topic of HIV in school either in tutor time, or assembly. I would suggest you put this image on screen to start. Ask what people see…

Does it surprise people to hear that this is Gareth Thomas and that he is gay. He is the first openly gay professional rugby player in history. That he is married to another man….?

How does this image contradict the stereotype of gay men we usually see?

Ask: does anyone know why Gareth Thomas has been in the news recently….?

What have you heard about HIV…?

This question acts not only as a needs assessment, helping you to gauge how aware the group is of HIV – allowing you to pitch the rest of the session (or any follow up sessions you may lead) at the right level – but also gives you something to return at the end to help you measure how much the group has learned.

Play the film clip above…

Ask what have they learned? Is there anything surprising? Do they think it was fair of the press to tell Gareth’s parents or to threaten to print the story?

Do people (even those in the public eye have the right to privacy?)

Ask the group if they know why December 1st is important… (it is World AIDS day) perhaps suggest that people wear their red ribbons in show of support… you can even sell them in school… contact THT for details….

This session is simply to start a conversation. If you would like to follow up this assembly with further activities perhaps use our blog from last World Aids day

Or subscribe to our Do(i)ng It programme for secondary schools for more resources and lesson plans that explore HIV.

You cannot copy content of this page: ©2019 GOTR SRE Consultancy Limited. All Rights Reserved (all wrongs learned from).